Vector versus raster graphics: the good, the bad and the ugly.

Depending on what type of figure or design you aim at, you may want to use either vector or raster based software and formats. Here are some guidelines: 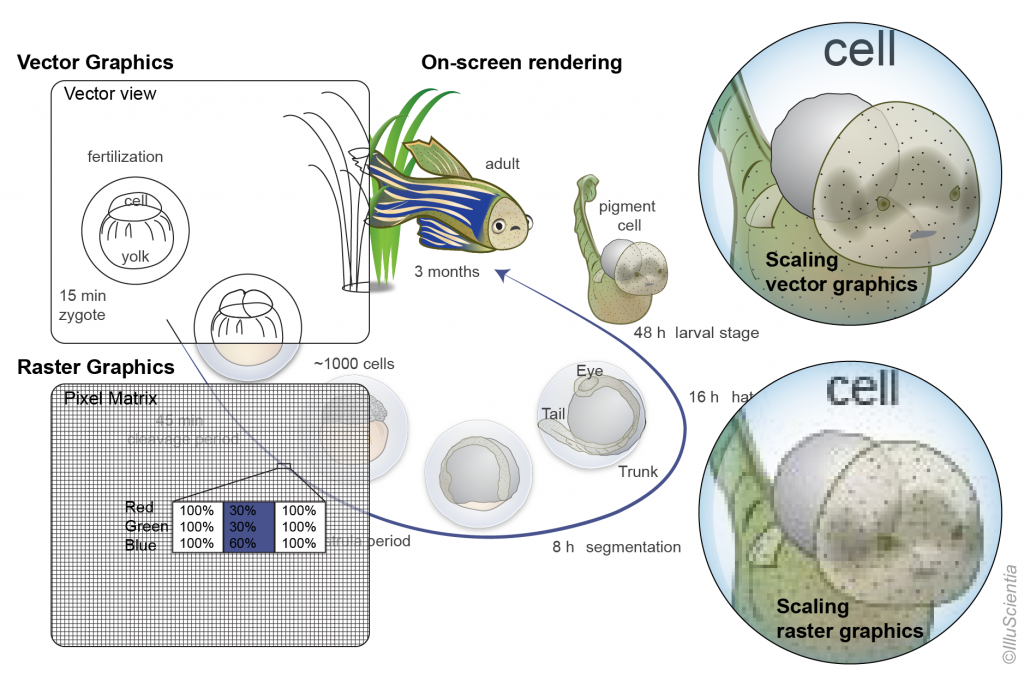 The vector graphics (upper part of the image) is based on the idea that every graphical element – line, curve, shape, polygon – can be represented as vectors (also called paths), which are going through anchor points or nodes. Each path may be assigned a stroke color, thickness, fill and further visual effects. This enables to scale arbitrarily images without any loss of resolution. The raster graphics (lower part of the image) is representing an image as grid of pixels or points of color and thus the initially set resolution is fixed, resulting invariably in quality loss of the image while scaling.

In general, you are well advised to know at least two different software tools, one for vector graphics and one for raster graphics. Be reassured however that modern programs are increasingly mixing features of both as each approach has its advantages and its drawbacks.
Adobe Illustrator and Adobe Photoshop are probably the most known software tools for vector and raster graphics, respectively. However, many other commercial and non-commercial programs exist and you have the choice.
I encourage you to have a look at the following open source software:
Inkscape is a vector graphics editor, very good for creating simple figures or even fairly complex designs like an entire poster. Despite being vector-based, it offers some features of raster graphics as well. It can be used to improve a script generated plot or extract elements from a PDF file in order to transform them further. Another vector-based software, Xara Xtreme, offers similar features and is free for Linux platforms.
Gimp is already a well known raster graphics application ideal for such tasks as photo retouching, bitmap image composition and creation of photorealistic images. What’s more, the latest version partially supports vectors too, enabling you to keep your lines and contours crisp as in vector graphics and at the same time apply special effects available in raster graphics.